Our jewellery at www.wairuadesignz.com is “Wearable Art” hand-carved by a family of skilled artists from Auckland, New Zealand.

On a recent trip back to New Zealand, I spent some time with the Maori/Pacific Island family that make our bone carvings.

It was a hot day in Auckland, when we went to visit the whanau/family. When we arrived they were gathered at the front of their property chatting and watching over their children who were running around in high spirits.

I was introduced to Kaponi by his relative Moana. Kaponi started carving in 1997 when he was 13 years old. The carving skills and knowledge were handed down to him from an older member of the family.

Traditionally, Maori used bones from stranded whales for their carvings.

With the introduction of European cows in the late 18th century, came a new medium, cow bone. This is now the primary resource for making bone carvings.

The beef bone is gathered from a butcher, cut up, then soaked in warm water. This removes any excess meat.

The marrow is scraped from the centre of the bone using a knife. The bone is then rinsed and left to dry for 24 hours.

The carvers then place their design onto the bone and hand-carve the bone using various tools, handsaws, files. 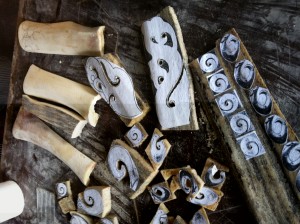 After the piece has been carved it is placed into a solution of water and bleach to draw out the oils and clean and whiten the bone.

It’s then left to dry again and any further decorations such as paua inserts are added to the carving.

Finally the finished carving is polished and ready to wear.

You might have noticed a Maori bone carving  hanging around the necks of some pretty well-known celebrities. 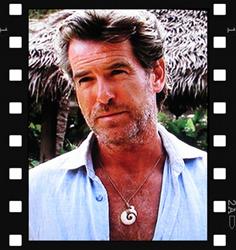 I’m no celebrity but I also wear my Maori bone carving pendant most days, I have a few  pieces and alternate between them. I especially like wearing them against a dark solid colour background, this highlights the beauty of the carving.